You are here: Home / Immigration Law / The Immigration Reform Bill Has NOT Yet Been Passed 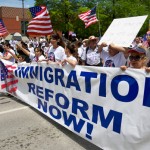 The delay is mostly political – the Republicans and Democrats cannot agree on fundamental issues in the bill – and has resulted in the failure to produce a bill to address the status of 11 million undocumented immigrants already in the country.

Unfortunately, this means that the Immigration Reform bill is experiencing the same type of delays that gun-control bills have experienced. Many are forecasting indefinite delays, especially if no bill is passed before the Congressional break in August.  When the Congressmen return, many will be campaigning for reelection and will be reluctant to pass controversial legislation. There are some Congressmen, however, who have been working on a comprehensive immigration bill for over 4 years, and they remain hopeful that an Immigration Reform bill will eventually pass.

On July 1, 2013, Attorney General, Janet Napolitano’s July 1, 2013, announced:  “After last week’s decision by the Supreme Court holding that Section 3 of the Defense of Marriage Act (DOMA) is unconstitutional, President Obama directed federal departments to ensure the decision and its implication for federal benefits for same-sex legally married couples are implemented swiftly and smoothly.  To that end, effective immediately, I have directed U.S. Citizenship and Immigration Services (USCIS) to review immigration visa petitions filed on behalf of a same-sex spouse in the same manner as those filed on behalf of an opposite-sex spouse.”

In terms of Immigration Reform and immigration laws period, this means that whatever happens to the immigration bill, legally married same-sex couples now have the same immigration rights as straight couples.

If you have any questions about Immigration Reform, the new immigration law, or any other immigration issue, please contact us AT (317) 236-0486 to schedule a free consultation with a qualified attorney. Know your rights! A NOTARY IS NOT AN ATTORNEY!