Written by Christian A. Mendoza

Immigration can easily be divided into five governmental entities: Customs and Border Patrol (CBP), Immigration and Customs Enforcement (ICE), U.S. Citizenship and Immigration Services (USCIS), Executive Office of Immigration Review (EOIR), and the Board of Immigration Appeals (BIA). As you can conclude from the name of this article, the EOIR and BIA are closed—for the most part—due to the “Federal Government Shutdown.” 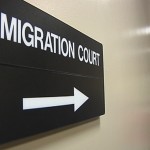 For example, USCIS is mostly funded by fees that are paid by applicants who seek an immigration benefit. The governmental fees for filing an I-130, Petition for Alien Relative, are $420.00 per application. That $420.00 will go to pay for processing, and the functioning of USCIS, and, of course, the same goes to all other USCIS applications and fees. For reasons like this, the U.S. Department of Homeland Security has had to “furlough” or temporarily lay-off only 31,295 out of its 231,117 employees—leaving intact 87% of its operation.

Although this is all good information, you may be asking: how does this impact me? It could affect you and your loved one, if you or your loved one is in immigration proceedings—and it could potentially slow down the speed at which you or your loved one receive a Green Card, a Work Permit, or even a United States Citizenship. At this moment, only people who are currently being detained by ICE are able to have their case heard by an immigration judge. And those who are currently in proceedings, but who have been released, will have to wait for the Federal Government Shutdown to pass in order to have their cases heard.

The impact of the Federal Government Shutdown on the immigration system is severe—and even as such, it is only a small part of the impact that it is having in this country and the economy. The number of employees who have been “furloughed” or temporarily laid-off by the U.S. Department of Justice alone is as if the entire city of South Bend, Indiana, was temporarily laid-off. South Bend is the 4th largest city in Indiana. Also, what the U.S. Department of Homeland Security has had to furlough is as if the entire city of Beech Grove, Indiana, was temporarily laid-off.

Whether the Federal Government Shutdown will impact your immigration case is something that you should ask your immigration attorney. Griffith Law Group is offering free consultations for those who need representation in an immigration court, and you can contact us at (317) 236-0486, or visit us at either 5150 Pike Plaza Rd., Indianapolis, IN 46224, in person, or at www.IndyImmigrationLaw.com. We also have a free legal clinic at our office at 10am on Saturday, October 12, 2013, feel free to call and sign up since we have limited seating.